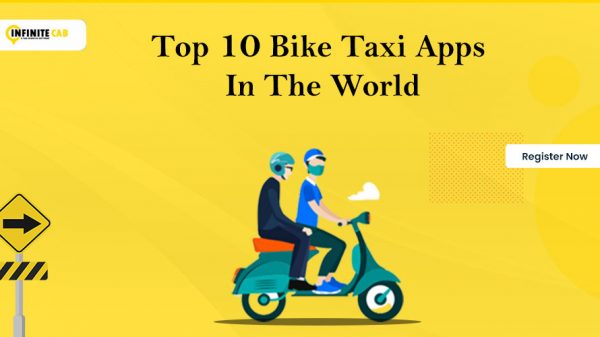 Taxi cabs have always been a popular mode of transportation in big cities. Many people choose to depend on cabs and other public transport to get them from place to place rather than owning a vehicle. The advent of taxi booking apps like Uber has made it much more convenient for users. Such apps managed using Taxi dispatch software can make it easy for anyone to schedule rides, choose destinations, make payments, and much more.

Top taxi booking app companies in the world have recently come up with the option of bike taxis. These are more economical compared to cars and hugely popular in developing countries. Here we will take a look at a list Of top bike taxi apps in the world.

What is an On-demand Bike Taxi App?

Bike taxis are similar to popular car taxi apps like Uber, and Ola. Instead of booking a four-wheeler, you book a bike via the ride-sharing app of the service provider. The nearby bike rider will receive your request and will pick you up from the pick point and provide a helmet during the ride. Once the ride is completed the payment is deducted online. Even a solo ride is introduced in this type of bike taxi service where there will be no rider to drop you at your destination.

Gojek,is one of the topmost bike taxi booking apps which are hailing from Jakarta, Indonesia. It was founded in the year 2010 and it started its operation with around 7 bikes and now the company has achieved a market value of around $2.5 billion. Gojek extended its operation to 25 different cities in Indonesia and employed more than 400,000 drivers for their business operations with cars, motorcycles, and trucks. The company is aiming to introduce its service in more countries in Southeast Asia.

Grab is a bike taxi app in Southeast Asia. It started as a taxi app in Malaysia by the founder Anthony Tan in 2012 and now they offer many transport and logistic services via this single platform. In 2014 November, they initiated their bike taxi service, and with success in this operation, they extended to Thailand and Indonesia. The drivers of Grab are offered smartphones and the whole operation is carried out via the Grab application platform.

Baxi is a Delhi-based bike taxi app and it is the first on-demand bike taxi app started in India. In 2015, it initiated its operation and now it is offering services in cities like Faridabad, and Gurugram. Certified drivers are employed by Baxi and their drivers are trained on safe driving. They also satisfy their customers with options for a safe ride like providing a helmet, hair net, etc. Baxi wallet is also integrated with their app and in November 2015, they were able to raise seed funding of $1.4 million.

Rapido bike taxi service was started in Bangalore during the year 2015. This bike taxi app gained popularity and started its services in different cities like Mysore, Gurugram, and Hyderabad. It has raised funds from many top companies including Google, Hero MotoCorp Ltd, etc. Rapido bike taxi app is powered by the Roppen transportation Service and it also offers delivery jobs with bike taxi service. The company raised funds around Rs 2.75 crore from Battery Road Digital Holdings LLC.

We all know that Uber taxi was a great success and this led to their Uber Moto service in March 2016. Now it has expanded its services to around 9 different cities in India. They have added this bike taxi as an option in their Uber taxi app. It has crossed around 2 million rides after starting the bike taxi service along with its taxi business.

Shohoz is an online ticket booking and ride-sharing platform or mobile app where you can book tickets online for bus tickets, hotel rooms, and events, and now they have started on-demand services like e-hailing taxis and bike services. It is a combination of e-ticketing and ride-hailing service that started in Bangladesh in 2014.

Ricky Thomson founded this bike taxi app in 2015. He was an entrepreneur and a bike taxi driver from Uganda. Safe Boda app is a platform for Entrepreneurs and Boda drivers catering to Africa. They employed more than 6000 drivers in Uganda and were backed by social enterprise investors. The company extended its service to Kenya in August 2018.

In 2015, the Bikxie bike taxi service was introduced in Gurgaon and it addressed the last mile connectivity issue in the city. The service was highly affordable and it was available in the key locations across the city. The first bike taxi provider that offered gender-based two-wheeler service. Pink for Women and Blue for Men.

Pathao is a ride-sharing app launched in the year 2015 in Bangladesh. Customers can also earn a good passive income with their cars or two-wheelers via their app. This app also offers package delivery where the agents can use their motorbikes. The company also claims that it delivers the package within a short time such as 90 minutes.

Bike pooling or bike-sharing is not new to us. Many would have offered a free lift to the passerby while going the same way. Now you can earn with this bike taxi service if you have your registered vehicle, and license, and join as a driver with these service providers. This list of top bike taxi apps would help you to know how effective the service providers are and as a customer, you can try these bike taxi apps for a safe and convenient ride.

How Bike Taxi Can Help Transportation Business Amid COVID

Why The Food Delivery Business Needs An Online Platform?